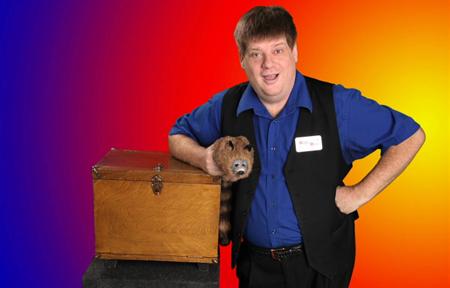 "How Did You Become A Magician?"

Funny you should ask,

Like many people, I worked my way through college as a waiter. I couldn't remember the specials and I dropped things a lot but I figured I made up for it by doing small magic tricks for my customers. As time went by the customers started asking me to do more and more magic. Often this would cause me to fall behind even more than usual. The other waiters had to cover for me.

One day the manager took me aside and asked me if I would mind just doing my magic tricks and forget about serving the food. I told him it would take me a few weeks to get an act together. He said, "start tomorrow."

Wow, I couldn't believe it. Suddenly I was a paid professional magician! To this day I don't know if it was because I was a good magician or a terrible waiter.

In a short time I was doing magic at several restaurants, performing in a juggling act and running a magic shop...all while going to college.

I decided to be a performer but was determined to complete my Electrical Engineering degree. Unfortunately I decided to go to a week long juggling convention and as a result, failed my last big test. I knew it was a long shot but I went to talk with my professor. I said "I'm not going into electrical engineering I'm going to be a magician. I just want to get my degree because I'm so close". He said, "Show me some magic." I did my best card trick. He said, "Hmmm...So, you're not going into engineering?" I shook my head no. He said "Ok...you pass my class."

I might be the only person ever to get a conditional degree from the University of Florida.